The OMCC Junior Enthusiasts Trials Squad met on Saturday for some more training and Fun activities. Weather the previous day flooded one of the sections so Rocky kindly set another on higher ground. We still had some nice water practice in the sections

Practice included tight turns for the sub juniors and some more serious stuff for the juniors who even got an intro to hopping techniques. Time was spent on how to ride the best line through the section with plenty of practice runs, then in reverse. The format this time was a 4 round mini trials where the parents took on the scoring. Improvements were very noticeable from the beginning of the year

Thanks to the helpers Janina for lunch, Rocky the Cook, Les Patterson, Justin Stone , Mike Brady the trainers

Darcy Mitchiner showing his skills through the water 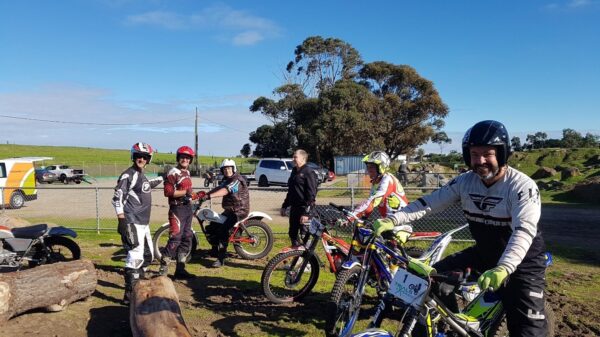 For ALL Adults and C Grade and above Kids

Training is Free to members.

This is a BYO lunch event

Please assemble ready to ride at 10.00am on the Club Veranda

We will have several groups of different levels and training from beginners to A grade. We also want to encourage Juniors C grade and above to attend.

There will be 2 hours training with several sections to practice

Please fill in the google form by using the link below to register.

The VIC AMA Winter Series is now well underway with the completion of Round 3 at the fantastic property in Winchelsea.

It was a great turnout with 49 enthusiastic riders who experienced a variety of challenging sections. The conditions were perfect, it was a bit chilly early on but the rain held off all day allowing us to make the most of the well set sections.

A special mention goes out to the land owner for making this property available to us again, and thanks to all those that put in a solid weekend of work to get this event off the ground, your efforts are greatly appreciated.

We look forward to seeing you all at our next event. 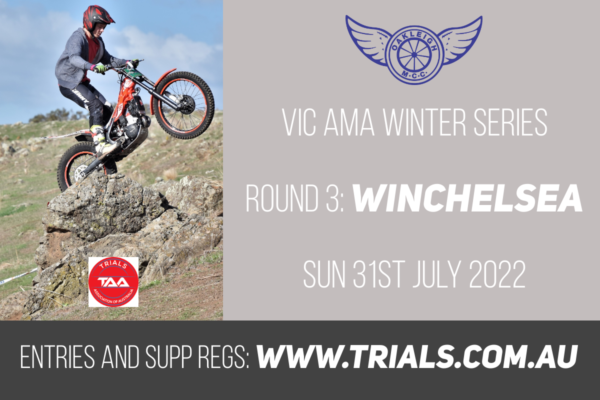 OMCC will be hosting Round 3 of the joint STR & OMCC Vic AMA winter series at one of our favourite properties: Winchelsea on Sunday 31st July.

We hope to see all you wonderful trialista’s there!

The series dates are:

We had 14 kids for the OMCC Junior Enthusiasts Trials Squad training on Saturday. Weather looked pretty bad first thing but the weather gods smiled and not a drop for the training session. There was lots of mud and wheel spinning in the tricky conditions!

Practice included tight turns, balance on planks and wheelie practice. Dan Stanthorpe won the longest Static balance. His tyres appeared to be glued in the mud. Mason Brady was a clear winner in the slow race and Fletcher Theile did a massive skid to take out the longest skid competition

Zachary did a demo to show the kids his awesome skills and what they can aspire to.

It was great to see most of the parents joining in and helping where they could and also cleaning up the sections. This was a great help. Also, thanks to Mark Brincat for the offer of the Come and Try ride on his kids bikes.

To end the session there was a Treasure Hunt where the Kids had to follow the clues and locate the hidden lollie loot.

We noticed a heaps of progress from the  JETS and  lots of big smiles as they  achieved new skills. Well done kids for getting out and playing in the mud!!

Hope to see you there. 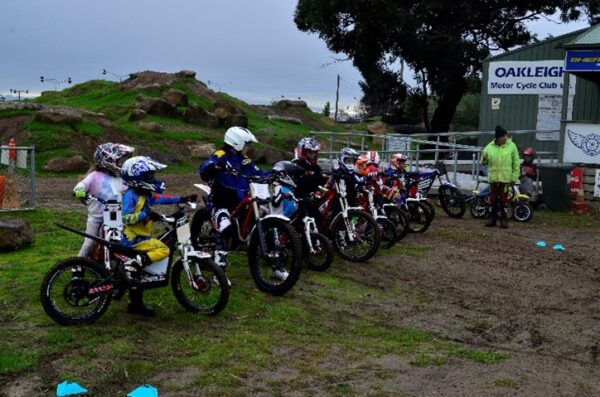 Training is Free to members
BBQ lunch will be provided
Gates open 8.30 am, please be ready to ride and meet on veranda at 9.00am

New and day members welcome by appointment (conditions apply)
We will have several groups of different levels and training requirements up to C grade.
There will be approx. 2 hours training with fun activities and a Mini Trail with awards for
Juniors and sub juniors. Finishing with a BBQ lunch.

Kids can Ride any mini bike or a push bike. By popular demand we will have another
TREASURE HUNT after Lunch.

New parents that want their Kids to try the sport can book a 15min Come and Try Ride.
Booking is essential and conditions apply for this. The “Come and Try” will start at 1.00pm.
Spots are limited so book early

Contact the OMCC SECRETARY to reserve your spot
[email protected]

The OMCC Junior Enthusiasts Trials Squad met on Saturday for some more training and Fun activities. Weather was not that great but the kids stuck it out until the end. Well done!

Practice included the reasons why trails is done standing, how to do a wheelie, best skid , slow race and turning practice then ending with a mini Trial Competition.

We had some balance games during or mid-morning break. Dylan Rees did a demo including wheelies a failed attempt and crash on Dylan’s Rock as well as jumping over Stan while lying down.

Thanks to the helpers Janina for lunch, Trainers Geoff Lewis, Les Patterson, Justin Stone , Mike Brady.  Also Justin for the trophies supplied and Les for the Photos & Dylan for the Demo and help

Kids had a great time and there were plenty of smiles and Hi Fives for achievements and progress was noticeable.

Hope to see you there. 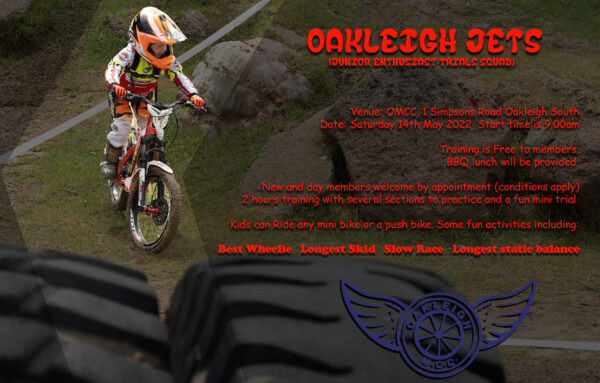 The second round of our junior trials training sessions is being run at the OMCC grounds on Saturday 14th May.

Don’t miss out on this great opportunity to learn some new trials skills in a relaxed and fun environment. Open to all kids on any type of bike: trials bike, mini bike or push bike. There will be lots of fun games and activities including: Longest Static Balance, Best Wheelie, Slow Race and Longest Skid.

Training is free to all members, and day memberships are available for those that are not current club members.

Where?: OMCC Club Grounds, 1 Simpsons Rd Clayton South
When?: Saturday May 14th, 9:00am
Lunch: BBQ Lunch will be provided

Register your interest with: [email protected]

Thanks to everybody who attended our fantastic 2 day Easter trial at the Coleman property in Glenmaggie.

With over 100 competitors, perfect weather, and a great range of sections, there was something for everybody.

Thanks to all entrants and volunteers who made this event a success – we look forward to seeing you again next year. Here are the final results: 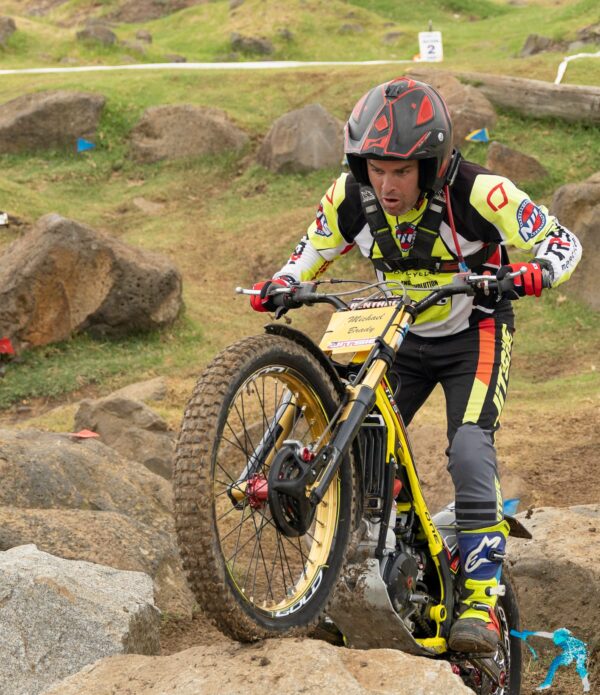 Come on down for a practice ride between 10am and 2pm

We look forward to seeing you there!