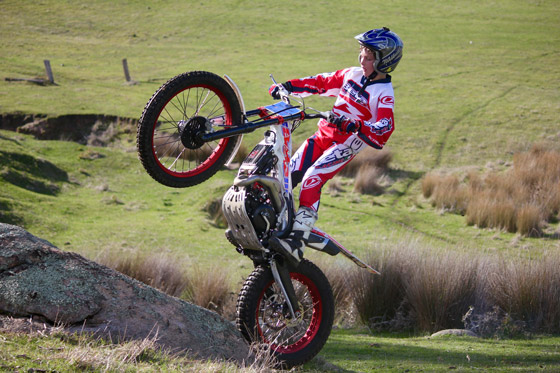 NARRE WARREN East’s David MacDonald emphatically won the Junior A class at the 2015 Victorian Moto-Trials Championships that took place at Sedgwick on August 15-16.

The 13-year-old from the Oakleigh Motorcycle Club blitzed his competition and the challenging terrain away, dropping just one solitary point from the weekend. “I went into the competition with the right attitude. I approached it with an open mind. The terrain and competition was alright, it wasn’t too bad,” David said.

“I pretty much sailed through the course. It was pretty dry, it wasn’t wet at all,” David said. His most memorable moments throughout the competition included clearing a section first, and completing the whole weekend with just one bad section.

“I only lost a point. I had a very good weekend. I worked hard and it all came together,” he added.

David will head to New South Wales at Pacific Park in two weeks’ time for the Australian Moto-Trials Championships on August 29-30 where he’ll again be aiming to win another Australian title, this time in the Under 13-16-year-old class.

“I feel pretty confident. I’m going to go there with the same attitude that I had at the Victorian Moto-Trials Championships with an open mind. Hopefully, it’s a similar weekend,” David added.

David would like to thank his family, especially his Dad as without him nothing could happen. “I’d also like to thank my older sister Caitlin from Team Communications, Beta Racing Australia, and Global Racing Oils for all their help,” David added.